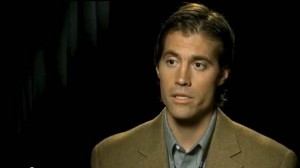 Pope Francis has made a private phone call to the parents of journalist James Foley, who was killed this week by the Islamic State group in Syria. The Vatican said the Holy Father consoled them for their loss and assured them of his prayers. Fr James Martin SJ said Diane and John Foley were “moved and grateful” for the Pope’s gesture.
The 40 year old journalist was working in Syria when he was abducted two years ago. James said he wanted to “expose the untold stories” in areas of conflict.
In 2011 he worked in Libya, where he was also kidnapped and imprisoned. Writing in the magazine of his old Alma Mater, the Jesuit Marquette University, after his release, he recounted how he began praying the Rosary during his imprisonment, adding ‘ it helped to keep my mind focused.’
James wrote: ‘I began to pray the Rosary. It was what my mother and grandmother would have prayed.  I said 10 Hail Marys between each Our Father. It took a long time, almost an hour to count 100 Hail Marys off on my knuckles. And it helped to keep my mind focused.
Clare and I prayed together out loud. It felt energizing to speak our weaknesses and hopes together, as if in a conversation with God, rather than silently and alone. …
One night, 18 days into our captivity, some guards brought me out of the cell. … Upstairs in the warden’s office, a distinguished man in a suit stood and said, “We felt you might want to call your families.”
I said a final prayer and dialed the number. My mom answered the phone. “Mom, Mom, it’s me, Jim.”
“Jimmy, where are you?”
“I’m still in Libya, Mom. I’m sorry about this. So sorry.” …
“They’re having a prayer vigil for you at Marquette. Don’t you feel our prayers?” she asked.
“I do, Mom, I feel them,” and I thought about this for a second. Maybe it was others’ prayers strengthening me, keeping me afloat.
The official made a motion. I started to say goodbye. Mom started to cry. “Mom, I’m strong. I’m OK. I should be home by Katie’s graduation,” which was a month away.
“We love you, Jim!” she said. Then I hung up.
I replayed that call hundreds of times in my head — my mother’s voice, the names of my friends, her knowledge of our situation, her absolute belief in the power of prayer. She told me my friends had gathered to do anything they could to help. I knew I wasn’t alone.
My last night in Tripoli, I had my first Internet connection in 44 days and was able to listen to a speech Tom Durkin gave for me at the Marquette vigil. To a church full of friends, alums, priests, students and faculty, I watched the best speech a brother could give for another. It felt like a best man speech and a eulogy in one. It showed tremendous heart and was just a glimpse of the efforts and prayers people were pouring forth. If nothing else, prayer was the glue that enabled my freedom, an inner freedom first and later the miracle of being released during a war in which the regime had no real incentive to free us. It didn’t make sense, but faith did.’
Speaking after their son’s death Diane and John Foley talked about their faith and said they were proud that James had done God’s work.
“We know Jimmy’s free.” “He’s finally free. And we know he’s in God’s hands…and we know he’s in heaven.”
A memorial Mass for James will be also held on 18 October on what would have been his 41st birthday.