The celebrations for St Robert’s Feast Day 2010 got off to a wet start on the afternoon of Sunday 6th June. A group of about 45 pilgrims set out from St Robert’s church for the one mile walk to the ruins of Newminster Abbey. There were members of St Robert’s Morpeth, St Robert’s Fenham, as well as Anglicans from Morpeth and Mitford. The ecumenical dimension really enhanced the celebration. We even had a lone pilgrim all the way from Sunderland who very kindly carried the processional cross. 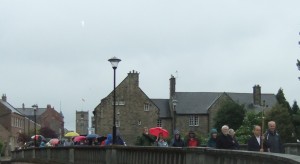 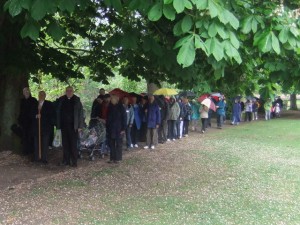 We were very grateful to the owner of the land on which the abbey ruins stand for very kindly allowing us to use several gates which meant that there was only one stile to negotiate. 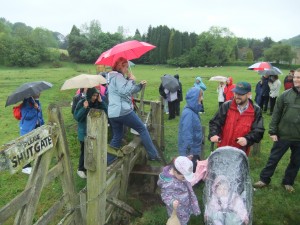 On arriving in the midst of what little remains of the abbey we found a clearing in what was once the Chapter House for a celebration of Vespers (Evening Prayer). This is the offical prayer of the Church which sanctifies the different parts of the day. When the monks were here they would have prayed the Divine Office (the official prayer of the Church) seven times a day. Here we were 400 years after the monks had been expelled doing exactly what they would have done every evening, praying the Office of Vespers (Evening Prayer). The format is exactly the same as it was then, a hymn, several psalms, a Scripture reading, the Magnificat (Song of Mary), intercessions and the Lord’s Prayer. It is much the same as Evensong in the Anglican tradition. The psalms were very dear to the monks and very familiar to them. During the course of a week they would have sung all 150 psalms. St Robert we know had a particular devotion to the Psalms and wrote a commentary on them. Unfortunately it no longer exists. It was said of St Robert, that he knew all the psalms “off by heart” and recited all 150 everyday. I am sure St Robert (and all the holy monks of the abbey over those 400 years) were smiling down on us on this wet Sunday evening as we recited the psalms, not sung in Latin like the monks would have done but very simply and prayfully recited in modern English. The psalms this evening were taken from the Common of Pastors and were very applicable to St Robert. Psalm 14 (15) for example:

Lord, who shall be admitted to your tent
and dwell on your holy mountain?
He who walks without fault;
He who acts with justice,
and speaks the truth from his heart;

He who does not slander with his tongue;
He who does no wrong to his brother,
who casts no slur on his neighbor,
who holds the godless in disdain,
wut honors those who fear the Lord;

He who keeps his pledge, come what may;
who takes no interest on a loan,
and accepts no bribes against the innocent.
Such a man will stand firm for ever.

And again, the antiphon to one of the psalms, a quote from the words of Our Lord in the Gospel were very apt:

This is the wise and faithful servant whom the Master placed in charge of his household.

Like the monks would have done every evening before vespers, we first lit some candles, 13 in all. We know that when St Robert arrived from Fountains Abbey in Yorkshire he brought 12 monks with him to found the new monastery. This was the custom in imitation of Our Lord and the 12 apostles. So, these 13 candles struggling to stay alight in the rain reminded us of St Robert and that first band of monks who came here on the feast of the Epiphany 1138. We also offered some incense, again, something that would have been very familiar to the monks, and we prayed, let our prayer in your sight be as incense, the lifting up of our hands as the evening sacrfice, the words of psalm 141, which reminded us of all the prayers of the monks over 400 years which have made this place “hallowed ground” even today. 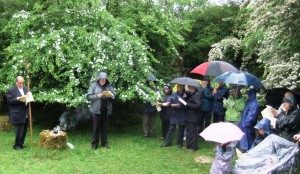 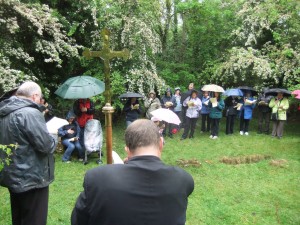 It was then back to the church hall for a much needed cup of tea and some cakes. 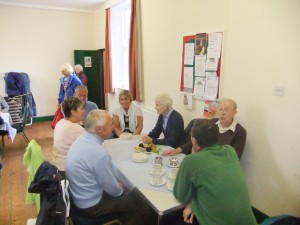 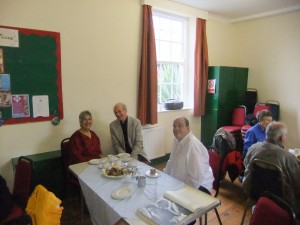 Celebrations continued the next day with the actual Feast of St Robert. The school children and staff at St Robert’s First School were given a treat when an ice cream van arrived to give everyone an icecream cornet. The Mass for St Robert’s feast was celebrated in the evening at 6pm. Immediately afterwards there was a Ceilidh and pie and pea supper in the nearby Riverside Lodge. A great night was had by all! 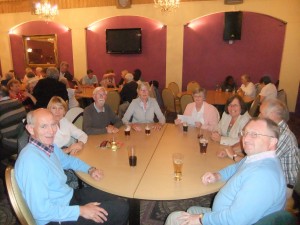 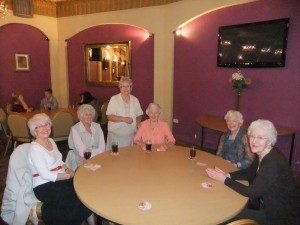 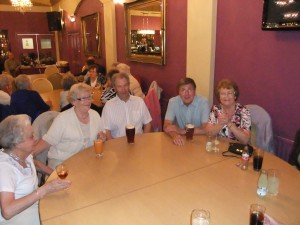 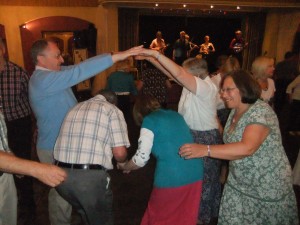 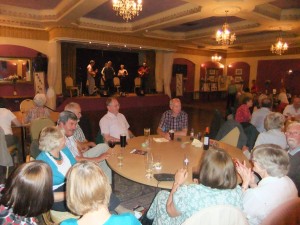 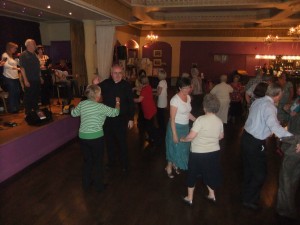 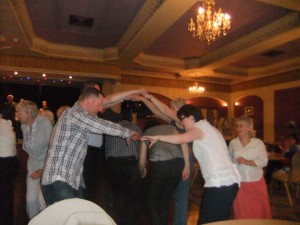 Finally, here is a photo of Newminster Abbey in 1950. You can see Mr Jim Doherty (Head Teacher at St Robert’s and Major of Morpeth.) He is pretending to be a bishop – holding his stick like a crozier and giving a blessing. With him is son and daughter, Mora and Michael. 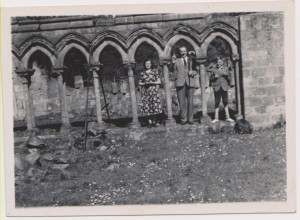 So, we celebrated St Robert’s day very fittingly and brought the 850th anniversary year of his death to a very joyful conclusion.

St Robert of Newminster, pray for us.

A happy feast day to you all,