The Church is named after St Robert of Newminster who, at the request of Ralph de Merlay and his wife, Juliana, daughter of Gospatric II, Earl of Lothian, founded the Abbey of Newminster in 1138.

There is an icon of St Robert in the Church and a stained glass window dedicated to him on the Sanctuary.

Although various places had been used by Morpeth Catholics from the mid-seventeenth century, the first chapel is recorded in 1767, with 85 worshippers meeting in a rented house in Buller’s Green to the North of Morpeth.

In 1778, a house in St Bede’s Place was bought and St Bede’s Chapel and a priest’s house created for £850 by Thomas Riddell of Swinburne Castle. He endowed a mission and in 1779, Benedictine priests (mainly from Douai Abbey) began an association of almost 200 years with the parish.

In 1848 Fr Lowe, OSB, a statue of whom, by Beale of Newcastle, is to be found in the entrance porch, started to collect money for a new church and on 20 August 1848 began the foundations on a site opposite St Bede’s Place.

The High Altar, made by A. B. Wall of Cheltenham and dated 1898, was gift from the mother of one of Morpeth’s most notable Catholic sons, Bishop John Cuthbert Hedley, OSB, and her name (Mary) is inscribed on the top of the Tabernacle. 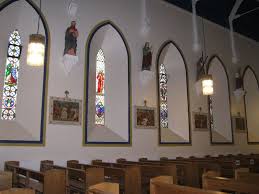 The statues surrounding the walls stand on fluted corbels between the lancet windows, by William Wailes, of the nave, over Stations of the Cross of 1948. They date from 1860 and are wooden statues of the Apostles, St Joseph and St Benedict which were imported from Switzerland. St Benedict and St Joseph flank the High Altar and the Apostles are; on the right side (from the Sanctuary to the back of the Church), St Peter, St Simon, St James, the Less, St Thomas, St Philip and St Thaddeus (Jude); and on the left side; St James, the Great, St Matthias, St Andrew, St John, St Matthew and St Bartholomew.

The Church also rejoices in having a War Memorial to fallen members for the Parish from the First World War in Marble and Bronze Altar Rails by Sir Giles Gilbert Scott. Originally erected around 1920, these now surround the High Altar, and a plaque showing the names of these Parishioners is housed in the entrance porch.

The Stations of the Cross replaced a black and white set of Stations and are set in Bath Stone. They were installed, according to the archives “as instructed but in the wrong direction giving the appearance of Christ going backwards on his journey to Calvary”

Please see the link below for further information:
http://www.taking-stock.org.uk/Home/Dioceses/Diocese-of-Hexham-Newcastle/Morpeth-St-Robert-of-Newminster